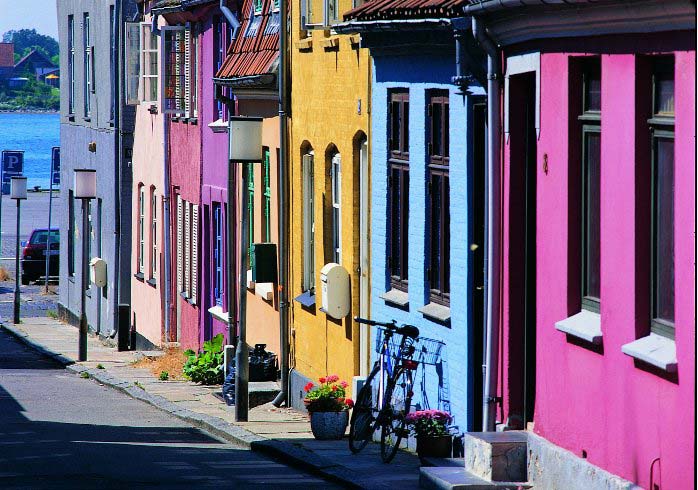 Ready for the Danish Islands

Have you always wanted to go to the South Sea and maybe do so with your own car? Then head off to Denmark. South of Fyn in the Baltic Sea there are 55 larger and smaller islands which show their belly in an area referred to as the Danish South Sea islands. Not only the name sounds like a dream: White slope beaches, picturesque villages and bright coloured houses create a Caribbean flair here high up in the North and you may be excused to think you are somewhere on a remote Pacific island. It is unclear how this region got this very unique name. One possibility could go back to the time of Danish seafarers that compared these difficult seas with its shallows and islands to the dangerous waters of the South Sea. Maybe the name is purely a geographical term.

Instead of a Hawaii shirt and surfboard you need to pack a summer jacket and bicycle for the Danish South Sea Islands! Whether on Ærø, Langeland, Lolland, Falster or Møn – many of the 3,400 holiday objects are not far from the Baltic Sea and lots have a sea view. Below we will introduce five of the Danish South Sea Islands – decide which one meets your wishes for your vacation. 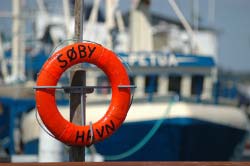 This is the only Baltic Sea island not connected with a bridge to the outer world. Here one has to set sail to see this picture book piece of Denmark. The crossing starts in Faaborg on Fyn and takes one by countless small islands in the Danish South Sea to the tiny port of Søby on the northern tip of Ærø. One can also transit from the neighbouring islands of Alsen and Langeland as well from Svendborg on Fyn. On Ærø the Baltic Sea is always close by, the villages are picturesque and the hustle and bustle of everyday life seems far away. Because of the mild climate figs and citrus trees grow here and in the summer months elder blossoms. The largest town on the island is Marstal situated on the east of the island but the historical centre is the small town of Ærøskøbing. Also known as a fairy tale town it seems as if time has stood still. The entire old centre is under monumental conservation and is probably one of the best kept in the entire of Scandinavia. A nice stroll over the cobblestones in one of the many alleys of the old city centre passing by house facades in ochre, red and yellow colours and their garden with roses blossoming let you forget the time. By the way the oldest house on the island was built in 1645. The lighthouse Skoldnæs is also worth a visit located on the western tip of the island. It may only be 22 metres high but despite this one has a lovely panoramic view. From this point it is only about 20 kilometres linear distance to Germany.

With more than 90 holiday homes atraveo has an extensive offer considering only 6,600 people live on the island. The majority of holiday properties are just 500 metres away from the Baltic Sea – but on Ærø one is anyway never far from the water! 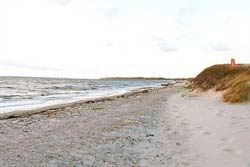 A „Dav“ on Langeland

The island inhabitants greet their guests with a hearty 'dav'. East of Ærø is the island of Langeland which has a 15 kilometre long beach Ristinge Hale on the peninsula Ristinge that is renowned as a delightful bathing paradise. Flat beaches, warm turquoise blue water and in the background colourful houses – all this creates a true Caribbean feeling. On summer days the temperatures can rise up to 30° C. But also from a historical point of view the island has a lot to offer. One should not miss out on Tranekær Castle which cannot be viewed from inside but it’s lovely park – one of the largest in Denmark – entices you to go on a long stroll. On the northern end of Tranekærs there is the old castle watermill which is home to a museum and to this day wheat is grounded here in the summer. If you enjoy a trip back in time then you should explore the barrows from the Stone Age. These complex stone graves were erected for the dead and are spread out all over the island.

Regardless where you spend your vacation on this island it is never longer than 15 minutes until you are at the sea. A holiday house with sea view is therefore not that uncommon here on Langeland.

The fourth largest Danish island Lolland located south of Seeland can easily reached by ferry from Germany. You start from Puttgarden on Fehmarn and get to Rødby on Lolland in about 45 minutes. The island is connected to the neighbouring islands Falster, Møn and Zealand by bridges. Next to the good transport links Lolland has a lot more highlights to offer. How about bathing on one of the nicest and warmest beaches 'Albuen' in the southwest of the island? O rare you more up to an active vacation? Then get hold of a bike and explore the island. There is a great bicyle network with good signs. The 48 kilometre long dyke route along the south coast between Nakskov and Rødby can be recommended. In Nakskov one can view a Russian submarine 359 that was built in 1953 and actively participated in the Cuba crises. If you are a zoo lover then we recommend you go to the safari park Knuthenborg in Bandholm located on the north of the island. Over an area of 600 hectares more than 900 animals such as giraffes, antelopes, moneys, kangaroos or moose are spread out.

Choose your desired holiday domicile from more than 400 holiday houses – there are not many apartments. The majority of houses are situated on large natural properties or surrounded by a garden. This guarantees total relaxation.

East of Lolland comes the island of Falster that has a 20 kilometre long flat slope beach along the south-eastern coast and is suitable for families. The popular holiday resort Marielyst is also close by and packed in the summer months. If you prefer it quieter then maybe you should consider a holiday house in Gedesby. The beach is great and not overcrowded in the summer time. From the north the forest area Bøtøskoven joins up that offers relaxation with both humans and animals. The dogs can have a free run around the fenced in dog wood. If you fancy a wander and would like to afterwards indulge in some Danish delights then you should stop off in the small town of Nykøbing-Falster directly near the bridge to Lolland and Guldborgsund. In the restaurant 'Den Gyldene Svane' you can dine in front of a fireplace like in the middle age or enjoy in one of the countless smaller restaurants some of the many Danish specialties such as Smørrebrød (special type of sandwich), Rullepølse (sausage) or Kanelstang (cinnamon cake). By the way there are more than 178 types of filling for Smørrebrød – so there should be something for everyone’s taste!

Here you can find the greatest selection of holiday domiciles. There are more than 1,000 holiday properties to choose from – whether you are looking for a comfortable holiday house with whirlpool, a wood house with sea view or a bungalow in a holiday park. 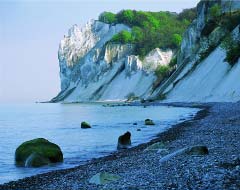 The small island Møn is towards the northeast of Falster and is known for its unique chalk cliffs in the east. The 128 metre high chalk cliff Møns Klint rises majestically above the Baltic Sea and is crowned by a big beech forest. The sound of the waves and the wind in the treetops turn this place into something magical. From the top of the chalk cliffs stairways with around 500 steps leads down to the sea which has posed a challenge to one or the other visitor. Also close by is the Castle Liselund that can be visited and is surrounded by an extensive park complex. The centre piece and also capital of the island is the small town of Stege with cosy cafés, a brewery and green area at the sea. The best way to explore Stege is on a walk: Start the tour at the harbour and stroll over the pedestrian area towards the town gate. Over the old city walls you return back to Stege Nor and the harbour. Beyond this every Tuesday in July and August a market is held with stalls and live music.

You want a holiday house that is no further than 100 metres away from the sea? Then Møn is exactly the right place for you as the selection of holiday properties close to the Baltic Sea is very good. In addition to this many holiday accommodations welcome pets!

Blogs sorted according to topics